Skip to content
[layerslider id="9"]
Home>Blog>Merchant vessel SSL Kolkata catches fire. What should be noted in International trade?
Previous Next

Merchant vessel SSL Kolkata catches fire. What should be noted in International trade?

Merchant vessel SSL Kolkata catches fire, most of goods are burned. What should be noted in International trade?

The container carrier was on coastal voyage from Krishnapatnam to Kolkata with the 22 crew members and 464 containers.

By the time the rescue team reached MV SSL Kolkata, about 70 percent of the vessel was on fire and master of the vessel had abandoned. 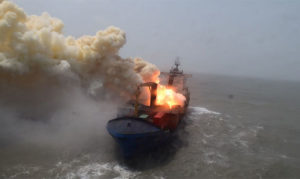 On 14th June 2018, the fire broke out due to explosion in one of the container and gradually it spread over. 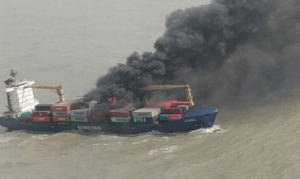 The container ship with a large fire was named SSL KOLKATA with a capacity of 1118TEU. At the time, the incident took place from Krishnapatnam, India’s largest transit port, to Calcutta! It is understood that the accident occurred in the container ship belongs to a local shipping company in India Shreyas Shipping & Logistics. The main business of this company is to provide barge services between the major ports in India to major shipping companies around the world!

In view of the large-scale container ship that involved Maersk and modern commercial ships and many other internationally renowned ship companies, the hundreds of containers that were devastated by the fires were also dominated by goods from major Chinese ports.

If the cause of the fire confirmation is that some freight forwarders have deliberately reported missing dangerous goods, the terminal port or shipping company will step up efforts to severely strike and punish dangerous goods! This will involve tens of thousands of unblemished containers and a large number of foreign trade logistics companies.

How to clean up the aftermath of the fire

In the face of this fire, the shipping company and all cargo owners that have goods on board will be unavoidable and can only face it!

The goods were burned and miserable!

If the goods are not burned by chance, they will also face general average liability!

Did not buy insurance, miserable!

If you have already bought insurance, you will have a long way to go even if you can recover some of the damage!

FOB term, consignee assumes risks and responsibilities. However, if the consignee refuses to pay or goes bankrupt, shipper needs to bear all losses.

For shippers who do not have insurance:

The first thing to judge is whether the cabinet has been damaged.

According to international practice, if the cargo of the owner is burned out, the shipping company will ask the owner for the packing list and invoice at the time of customs declaration, check the value of the goods, and compensate part of the loss in proportion;

This is the common practice of international average in the world, after which the shipping company will arrange the transfer (the time will not be too much hope).

What is general average?

The so-called general average refers to the special expenses and special expenses incurred by ships, cargoes and other property in the same sea voyage when they encounter common dangers, and for common security, intentionally and reasonably taking measures.

Ships loaded with cargo encounter wind and waves. Property damage caused by discarding a portion of cargo to prevent the overturning of ships is a general average.

Since general average is a loss caused by common security, it should be shared among the various beneficiaries and should not be borne solely by the injured party.

General average is a system unique to maritime law established on the basis of special maritime risks. It is of great significance for avoiding losses caused by typhoons, tsunami, stranding, collisions, collisions and other dangers of ship and cargo.

The conditions for the establishment of general average are:

And this will be a long process!

In this general average, the total amount of general average should be calculated on the value of the damaged consignor’s cargo when it is loaded in Osaka plus insurance premiums and freight, minus the freight that does not have to be paid after the cargo is lost.

Determine the apportioned amount of each beneficiary. In practice, the following general steps are used to calculate the general average amount of the beneficiaries’ apportionment:

In order to ship safely, please buy insurance.  And what the most important is that declare dangerous goods truthfully. Do not ship dangerous goods without transport license.

For example, in air and shipment shipments, battery report of MSDS and UN38.3 ,  shipment licenses are needed to make sure the battery safety. All of our batteries used in fixed wireless telephones and fixed wireless terminal are safety and with reports. Please feel free to order.